I’ve wanted to run the 17km Warrie Circuit in Springbrook for ages, and today, with the wife away and the kids in kindy, I finally got my chance. The Warrie Circuit starts at the Tallanbana picnic area off Springbrook Rd – about an hour’s drive from the Gold Coast. The trail drops through lush rainforest, passing multiple waterfalls and sidling the top and bottom of cliffs. It is described as a 5-6 hour hike, but it can be run in around 2 hours.

But it’s isolated. And there will be snakes. And I’d be running it on my own.

So the PLB went into the pack, as did the compression bandages. These joined the map, compass, GPS, food, water, survival blanket, first aid kit, torch and whistle. Then I piled in a whole lot more unnecessary stuff like a polypro top, woolley hat, gloves and rain jacket. None of these would be required in the 30C+ heat, but I need to carry them (and more) for the Jumbo-Holdsworth run in two weeks so I’d better get used to it!

I decided to take a quick refresher on compression bandage techniques before I left (no point having the bandage and not knowing how to use it!). In the process I discovered that moths, caterpillars and even the friendly-looking platypuses have a poisonous sting! Man, you’ve gotta respect the first Australian settlers – while my Kiwi ancestors migrated to a giant aviary, the Ozzies migrated to the deadly animals exhibit at the zoo! I’m sure those that surived rapidly learned: “If it moves, it stings!”

I was apprehensive about this trip and found myself coming up with reasons not to go. Was I scared of the risk involved? Or was I scared that the risk I was taking was irresponsible?. With the wife away and no family in town, the kids were in my sole care. I had noone to leave intentions with, so nobody would know where I was if I didn’t show to collect them from kindy. Serious stuff!

In the end, I got an email from Shaun saying he’d entered Jumbo-Holdsworth in two weeks – that snapped me out of my indecision and sent me out the door. I had 6 hours till kindy pickup and should only need 4 of them (1 hour to drive there, 2 hr torun, and then 1 hr back). What could possibly go wrong?

Within 100m my “snake alert” had gone off a dozen times. There were rustles from the side of the track, crashes from the bushes, and lizards darting across the track in front of me causing me to slam on the emergency brakes. I soon lowered my “snake alert” threshold! I was also trying to ensure my gaze was fixed at least 5m down the trail, but with my head up, my mouth was too far open, and several flies perished in attempts to explore this enticing cave. I quickly adopted the “tongue behind the teeth” technique as a secondary line of defence. It was critter city out there – a snake seemed inevitable.

I didn’t see what tripped me. I was running pretty swiftly downhill and my right foot must’ve caught a rock or a root. The trail is pretty nice here – solid rock or packed boulders, threaded with roots, then covered with a thin layer of dirt and plenty of leaf litter. It’s firm with a little give – perfect for running. But you do have to keep your eyes peeled for the odd rock or root that pokes up – it’s not roll your ankle material, but you could catch your foot and take a nasty fall.

My right foot stopped stopped moving forwards but my body kept going. One minute I was light as a feather, floating along the trail, the next I felt like a 72kg bag of cement tipped off the back of a truck and plummeting towards the dirt. My left foot tried in vain to get under me and take my body weight. Then my right tried. My efforts only accelerated me horizontally and I kept going down.

As I fell, I scanned the path ahead, wary not to look off the sides of the trails because my mountain bike and motorbike experience had taught me that you go where you look. Ahead, the ground looked leafy but I could see protruding rocks. My right arm was out in front of me but there was nothing on the side of the trail that I could grab to arrest my fall. I could brace my arm to break the fall, but that might mean a broken arm or collar bone. So I keep it loosely protecting my head as I hit the earth with a THUD and then skidded a long, LONG way!

Here I take a quick break from writing to put the kids’ dinner out. I wince in pain as my right arm tries to take the weight of the oven dish. I’m so soft! It could have been so much worse. I find myself shaking my head in disappointment for the twentieth time. I’m a little disappointed in myself because I chose a risky run and put my kids well-being in jeopardy, but mostly I’m disappointed in myself for tripping and falling. I mean, who trips up, really?!

It was a HARD fall. Immediately I feared something was broken. My right knee had jarred into a rock and was locked up. My right forearm was rubbed raw but I could gingerly move it. Surreally, a bubble of blood appeared from one of my fingernails. 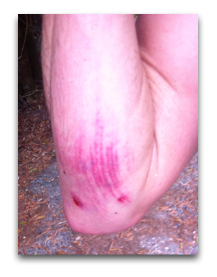 This was just what I’d feared. It had been 40 mins since I’d seen anyone and I was 6km from the trail head, all uphill. Could I splint my leg and hobble back in 3 hours to pickup the girls from kindy? I had a torch and a PLB so I wasn’t worried about not making it out – I was worried about what would happen to the kids when kindy closed! IDIOT! Lesson learned here.

Thankfully my knee started to release, and as I walked it loosened to the point that I could run again. After 5 mins of running I didn’t notice the knee at all – the arm had the pain-monopoly. But it was manageable and I was on my way. Happy days, crisis averted!

It’s fair to say that I didn’t enjoy the run so much from here. I stopped at the next stream and washed the dirt from my arm and leg, careful not to grab one of the little flitting creatures that were swimming in the stream – no doubt poisonous and blood-thirsty! 10 mins later I was at the “Meeting of the Waters”, the halfway point. With it’s massive ancient trees and boulders, I could imagine dinosaurs living here. But no – just mozzies. So time for a quick snack and then on my way.

From here it was all uphill. Most of it was runnable but at times the grade got a bit steep or there were steps, so I slowed to a walk. The fully laden backpack was making itself felt! There were a couple more waterfalls but I’d seen (and walked under) so many magnificent waterfalls already that these were more of a welcome respite from running. It was hot work and I was having trouble going slow enough to keep my HR down to a sensible level. I was hoping that after a bit of uphill, my legs would ease off and settle into a sensible pace. But with the gradient and the heat, my HR sat around 90% until I reached the top.

Somehow I managed to take a wrong turn and returned via the base of Twin Falls rather than the ridge above it. By the time I’d worked that out, I wasn’t keen to backtrack the 1km or so to see if I could find the turnoff I’d missed. Besides, the route I was on would take me back to the carpark, and would probably be about the same distance. By this point, 2 hours in, I was ready for the end!

So now I’ve done the Warrie Circuit. Nice scenery and a nice run. I’ll definitely have to do it again, when I’m not the sole-caregiver, and do it WITHOUT falling over!