This was a surprising and brilliant result for me, and I’m still a little stunned. This morning I felt so flat, I felt I’d sabotaged my preparation, and it seemed sub 1:30 might be a problem. It was no problem at all, as it turned out. I had a cracker of a race, and I don’t really know why!?!

A 4:15am alarm saw me parked down at the race venue by 5am – an hour before the gun. The start would be cold and dark, but a handy tip from Jen – strapping heated wheat bags to my calves – meant I could stay warm in the car and dash down to the start line 15 mins before the start. I had no support crew so took a chance and left the car keys on the tyre. The car was still there when I got back! 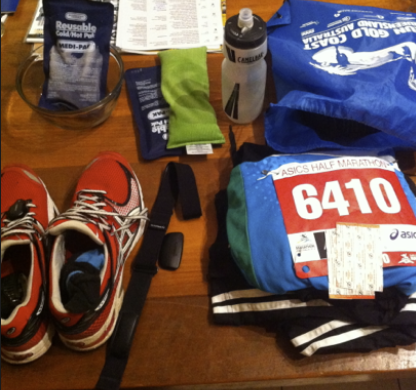 Heat packs were an excellent addition to my usual gear list.

My designated start group was “A” (sub 1:45) and it was only by chance, as I did a few warm up jogs up and down the road adjacent to the crowd, that I realised the 1:24 and 1:30 pace balloons were sitting 50m ahead of the “A” group. I jumped the fence and snuck in next to the 1:24. They called the elites forward, we shuffled up behind them, and then we were off!

My recent training had led me to believe that I’d be touch and go to break my 1:28 PB set last year. I’d failed to hold 4:05min/km in a long training run, so I’d revised my target to 4:10min/km. That would see me revisiting 1:28. But the night before, I decided I’d throw caution to the wind and see how long I could stick with the 1:24 balloon. They’d be running 3:59min/km. I’ve never blown up in a running race before and figured, while it would be unpleasant, I could learn a lot from experiencing it. Plus I was hoping that I might build enough of a buffer to still get a PB.

After the usual first kilometre of jostling, the 1:24 balloons settled into a pace that was too hot for me. Two kilometres at 3:47 saw me drifting off the back of the bunch, ready to let them go. But then the pace settled to around 3:57 min/km and it was OK. I pulled back into the bunch and found it almost comfortable to sit there, not worrying about the pace, just trying to match the steady speed of the pace runners. No drink stops for me – I ate and drank nothing.

Last year I gave up on the 1:30 balloon bunch because people within it were surging and swerving. This year’s 1:24 bunch were much more restrained; by the 10km mark everyone left seemed very steady, focussed and determined!

The half marathon is an out and back along the Broadwater, from Southport, north to Paradise Point. After the halfway turnaround, the pace runners seemed to up the tempo and, within a kilometre, the group was halved. A 3:53 and then a 3:52 saw my already high heart rate rise further (from 92% to 95%). But rather than feeling tired, this seemed to fire me up into race mode! We were still 7km from home and I was looking around to see who looked strong, who was going to make a move. The sane part of my mind was still wondering if I could even hold this pace!

Slowly, a grumble grew from behind. There were mutters that we were going to fast. “You’re running 3:50s!” came the cry. The pace makers eased off and the group swelled – until it got to the point where the only place I could go was straight ahead, between the balloons and out in front of the bunch. “Go for it!” urged one of the pace maker. Before I knew it, I’d made my break – 6km from home. That was not in the plan!

Breaking from the 1:24 balloon group. Didn’t realise until I saw this photo that quite a few runners started going too.

I found it tough on my own. I was pushing too hard and making no headway. I could hear the pounding feet of the 1:24 bunch (and the relaxed banter of the two balloon bearers) just metres behind. For the first two km I doubt I got more than 10 meters ahead. I didn’t want to look back.

I started thinking about letting them catch me so I could sit back in, hide from the imaginary headwind, and make another break closer to the finish. But I was worried that if I slowed at all, I’d end up dropping right through the group, and have to grovel my way home. My focus had changed from form to effort. Running in the group, I’d been thinking about posture, cadence and foot strike. Out front, on my own, all I was thinking about was pushing a little bit harder than I had been before – and holding it. I was bogging down, like a cornered fighter throwing weak punches without looking. 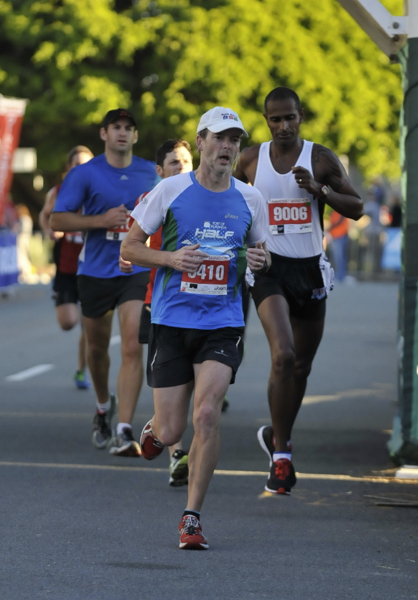 With 3km to go, first one guy, and then a second, broke from the pack and ran up beside me. It was the push I needed. A group of four of us worked hard together and left the pack behind. I drew myself taller, using the same visualisation that had worked in my Ironman run – the imaginary wire through my chest drawing me forwards and up. With no change in effort, suddenly I was running faster than before. With a 1000m to go, I started my barely noticeably sprint. It was all-out for a measly 3:46 kilometre. That got me another handful of places but cost me a composed finishing shot!

Let’s take a closer look at that finish face!

Yep, I was glad it was all over!

On a side note, getting a decent face from me during this run was a bloody difficult task for the photographers! There were tongues, grimaces and not a lot of beaming smiles!

But back to the race…

The highlight of the finishing chute was a M60-65 competitor, asking me which group I was in. He was worried I’d stolen his podium. I told him not to worry, that I was M40-45 but I’d aged 20 years on the run! Good to know that if I can hold this form for another 20 years there could be a podium spot for me…

Then it was back to the unstolen car, and home. I walked back in the door at 8am and showed my medal to the kids over breakfast. How cool is that?

To put this performance in perspective, this run earned me Strava PRs in all distances from 1 mile to 21.1km

I love how Strava calls my run a “Tough Sufferfest” (not just your typical Sufferfest!)

My longterm plan had been to see how fast I could go over the half distance before attempting a marathon. I’ve now gone faster than I thought I could. I should be thinking of the full marathon but instead, I’m wondering how much faster I can go in the half!

Only a few weeks ago, sub 1:20 was my Big, Hairy, Audacious Goal. Now it seems within reach. I wonder…

This entry was posted in race report and tagged half marathon, race report. Bookmark the permalink.