2012 Port of Tauranga Half Relay

I spent 39 minutes of my birthday churning my way through a salty chowder, with 2,000 other triathletes. As I get older, birthdays are less of a celebration and more of an unpleasant reminder, so racing the Port of Tauranga Half, in a family relay team, made the day.

Earlier in the year I’d noticed that the 2012 Port of Tauranga Half was going to fall on my birthday, and that we were going to be in Mt Maunganui around about that date. Fate was calling. I wasn’t too keen to do it solo – I’d tried that in 2010 and it was damn difficult to organise a build and taper over the Xmas/New Year period with three young kids – and this time I’d have four!

But a relay might be fun? I threw the idea out to the family, to an underwhelming response: SILENCE! After a few follow-up emails, “Team JET” had taken shape.

I’d been hoping to do the run because in 2010 I’d done the swim and bike but wasn’t able to run due to a calf tear (of course!); I wanted to experience the base track around the Mount. But noone wanted the swim, so I took it. This worked perfectly in the end, as come raceday I was once again stuck in calf rehab mode and unable to run freely.

My swim has never been flash. It’s the weakest of the three disciplines, and I’ve never spent much time training it, and never had any coaching to improve my technique. After getting through in 39 mins in 2010, would I be able to improve that in 2012?

Once again I found it very difficult to get any decent training over the Xmas period. But after almost a month of no swimming, I got out for 4 wetsuit swims in Pilot Bay during race week. I bloody needed them!

2010 had been a shocking swim – my worst ever. I didn’t read the currents and got swept past a buoy and had to swim back, against the flow of swimmers, to round it; then I swam too close to shore and was almost touching the sand with each stroke. Add to that a constant navigation problems with the boats moored on course, and regular mouthfuls of salt-water from the chop – in 2010 it was a swim I very happy to see the back of!

These four wetsuit swims got me used to the chop, the currents, the bobbing boats, the murky water and sighting. There’d be no repeats of the problems of 2010!

Only having to do a third of the race (well, about an eight really) saw me feeling pretty relaxed pre-race – so relaxed that I didn’t write-up my usual meticulous race-plan. I think this is the reason I woke-up at 3am and couldn’t get back to sleep. I was thinking about how the day would pan out, something I usually know by heart thanks to the race-plan.

Tip of the day. Want to sleep well before a race? Prepare a race-plan, and commit it to memory!

The race itself went very smoothly. Teams start 30 mins after the other competitors so I got to watch the pros start and finish before heading down to the start line myself. I swam beautiful straight lines over the two loop triangular course. In fact, I was sighting so well that I broke from the bunch to take a more direct line in the second loop. It felt quicker, but in hindsight, looking at my Garmin file, the lack of drafting slowed me down in the second loop. 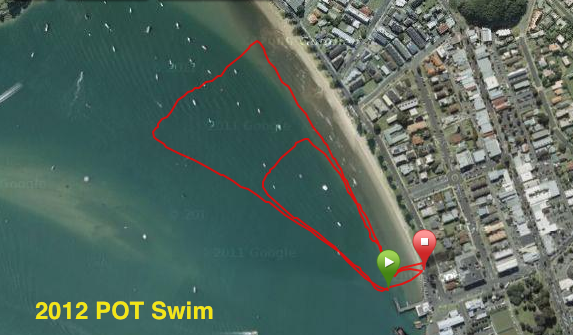 I felt I’d swum the perfect race and had gone harder than usual because it was a standalone swim. I was surprised to see 39 mins on the clock again when I exited, but perhaps this was all my swim fitness was capable of? Once again the POT swim has bested me!

Coming out of the swim I instinctively started stripping off my wetsuit – whoops! I handed over to brother-in-law Mike, who rode better than he’d hoped. And he handed over to brother-not-quite-in-law Tony, who also ran better than he’d hoped. I was left with a very pleasant five hours of cheering, chasing and coffee-drinking, and got to watch Cameron Brown and Jo Lawn clean-up the race. What a great day!

To top it off, I got home to a fantastic birthday spread, and had an afternoon nana-nap! Maybe this old-age thing ain’t so bad afterall?