Week 9. This is supposed to be the Recovery Week to end my BASE2 training block. I’ll do the same as I’ve done in previous ‘Recovery’ weeks and stick to the planned swim and run volume, but throw in some extra bike. In fact, I feel the need for a BIG ride – I’m nine weeks away from race day and still haven’t gone over 120km. Remember, I need to be able to ride 180km with enough energy left to run a marathon (INSANE!). I’ve added a 5hr ride for Sunday which will probably be a hilly 120km with a Time Trial up Springbrook to see if I’m improving. I’ll have to build this ride up over the month to 6,7,8+ hours. Total training planned : 14 hours.

Photo of the Week

Due to popular demand, I’ve reinstated the photo of the week section (ie. I actually took ANOTHER photo!) 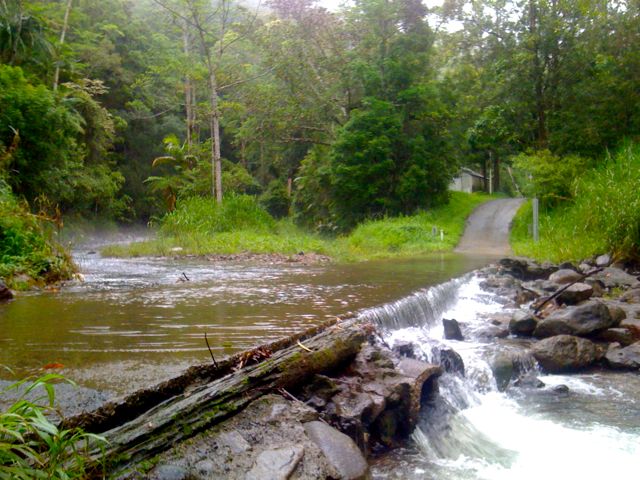 Tallebudgera Valley was in stunning form this morning with mist-shrouded peaks, lush green hillsides and the spatter of giant raindrops under the trees. I couldn’t quite get to the end of the road as this ford was still suffering from the Big Wet of the last month.