I almost retired the Spider-Helmet last week, but I’m glad I didn’t.

I was approaching a busy two-lane roundabout (a two lane roundabout is the perfectly engineered cyclist-killer), gauging the oncoming cars, their speeds etc, looking for my gap when out of the corner of my eye I spotted the swooping magpie. 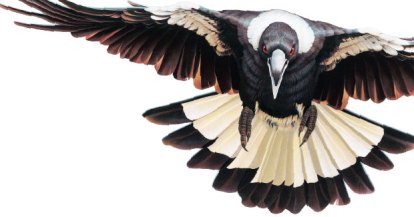 He was a metre away and already pulling out of his blood-crazed dive, unwilling to fly the cable-tie gauntlet to feast on the tender ear he desired. I threw him a half-hearted wave but he’d retired to a nearby lamppost to squawk at me. I tell you, it would have been bloody risky navigating that roundabout with a feathered-demon tattooing my skull – I reckon Spider Helmet saved my life!

It’s a design masterpiece. There are six long cable ties. Each points backwards and directly at the incoming magpie. My theory is that the magpie won’t be certain how long the cable tie is so it’ll pull out early. Here’s a shot from swoop-cam:

My 2-yr old named it. I came in from the garage after a ride. “Spider!” was all she said and then ran away!

And it’s been a success (against birds as well as 2-yr olds!). I’ve had a lot less swoops than last year, and none of those “tennis-ball to the head” surprise contacts.

But sadly, Spider-Helmet’s time is coming to an end. Spring is done and the magpies are relaxing. But more significantly, race season is approaching and there’s no way I’m going to turn up to a race with cable ties on my helmet (well, maybe, if there is a known magpie on the course!). But apart from the shame aspect, it just won’t sit comfortably upside-down in T1 loaded up with my gels and sunnies!

I’ll be sad to see it go. After the initial apprehension of wearing it in public, I’ve grown to enjoy the individuality of it. There aren’t many other hedgehogged cyclists out there, and when you do see one, there’s a guaranteed wave and knowing smile. A kindred soul!

The drawback, of course, is that I haven’t been able to go on any group rides (not that I do very often), and other cyclists tend to give me a pretty wide berth (really wide actually), so there’s been no impromptu “follow my wheel” invitations either.

But an unexpected (and rather pleasing) side-effect of Spider-Helmet is the new-found respect I seem to get from motorist! In three months I haven’t been called a “Faggot!”, or an “Asshole!” or been spat on – that’s a pretty good run for the Gold Coast! Motorists seem to be seeing me earlier and giving me a heap of room (still a few elbow-ticklers of course).

Maybe it’s the waving tendrils that catch their attention earlier, giving them more time to avoid me?

More likely, they see the crazy cyclist with a TV antenna on his head and want to have nothing to do with me! (“If he’s nuts enough to wear that stupid looking contraption on his head, who knows what he’s capable of?! Avoid! Avoid!!”)

I’m a pariah. But at the same time, I’ve been given a taste of the confidence and power of “The Feared” I’m the goth with the face-full of steel. I’m the skinhead with the mohawk. I’m the hagged biker with tatts. I’m Dr Evil! When I don the Spider-Helmet, I don the Crown of Power!

So the wire cutters are out and the cable-ties are off. I’m thinking of an upgrade for next Spring: little orange flags attached to the end of each cable tie. It will be super-visible and look even crazier. Mwa ha haa!

This entry was posted in bike and tagged bike, helmet, magpie. Bookmark the permalink.